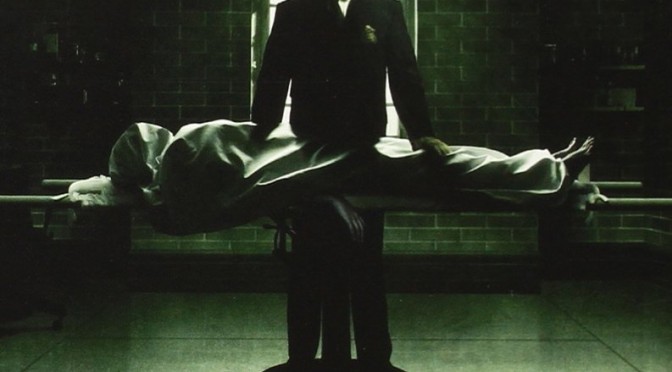 Filming of the first season of Murdoch Mysteries occurred between June 11 and October 17, 2007, primarily in Toronto and Hamilton, Ontario. Season one premiered on CHMI, the Winnipeg station of Citytv on Sunday, January 20, 2008; the rest of the Citytv stations broadcast the series on Thursdays, beginning on January 24, 2008.

Toronto City Council are entertaining the idea of abandoning direct current electricity for the city in favour of the new alternating current. Detective Murdoch and Dr. Ogden attend a public demonstration on the dangers of alternating current. It's clear that they already know each other. At the demonstration, a dog was to have been electrocuted, but instead Alice Howard, the newly crowned Miss Toronto Electric and Light, is killed when she pulls the switch. Constable Crabtree believes that a representative of the Toronto Humane Society, which was protesting the dog's execution, might be involved. Detective Murdoch meets Nikola Tesla (Dmitry Chepovetsky), who also witnessed the electrocution, and asks for his help.

When two respected officers of the court are murdered, Brackenreid fears he's next on the list; meanwhile Murdorch interviews for the Inspector's position at the new station.

Professional boxer Amos Robinson is shot after a fight and his wife Fannie is charged with murder. Having studied the blood on Mrs. Robinson's dress Detective Murdoch is convinced that she simply held her husband as she claims and he begins to review events to learn who had motive to kill Amos.

Arthur Conan Doyle (Geraint Wyn Davies), who is in Toronto to make a speech on spiritualism, invites Detective Murdoch to a seance hosted by Miss Sarah Pensall (Maria del Mar) where they are told of the location of the body of Miss Iris Winston. Detective Murdoch, despite his disbelief in communication with the dead, goes with Arthur to the location and finds Miss Winston murdered. Note: this episode provides an unlikely scenario, as it takes place in 1895, and Doyle's interest into Spiritualism did not start until around 1906–07.

Shortly before his wedding Wendell Merrick is found murdered in the church. In investigating the murder Detective Murdoch discovers that the marriage was a sham to claim an inheritance and that Mr. Merrick was homosexual. When Mr. Merrick's lover is also found dead by suicide Detective Murdoch discards jealousy as motive and looks to a larger suspect pool.

When the body of John Delaney is found in the woods shortly after he had argued with a drunkard who claims a dog fight was fixed when he lost a lot of money Detective Murdoch gets the case and discovers that his father is the prime suspect. Harry Murdoch (Stephen McHattie) admits that he was no friend of the victim but is adamant that he didn't kill him. Detective Murdoch believes that his father is responsible for the death of his mother and doesn't entertain his father's claims of innocence with the same vigour he would with someone else. With the help of an idiot savant who has a fixation for time, Detective Murdoch establishes a time-line which clears his father.

When a partially decomposed body falls onto the stage of the Grand Theatre during a performance of Macbeth Inspector Brackenried is startled. The body is identified via dental records as that of Virgil Smart, the owner of the theatre prior to his death a year before. With Mr. Smart having known to be dead they exhume the body previously believed to have been Mr. Smart. Dr Odgen does a facial reconstruction to identify the man in the grave. In questioning the players about the death of Mr. Smart, Detective Murdoch realizes that their recollections and accountings are rather detailed and similar for an event of more than a year previous. Constable Crabtree finds a hidden room in the theatre.

Richard Hartley, the newest member of King's Rowing Club's eight man team is found dead. Detective Murdoch discovers that Mr. Hartley had replaced Horace Briggs, an employee of the club, on the team. Dr Ogden concludes from the autopsy that Mr. Hartley was drowned but that he was also beaten. When his attempts to question the members of the team prove unproductive Detective Murdoch develops a lie-detective device to help sort out the truth from all of the lies and misdirection.

Arthur Conan Doyle (Geraint Wyn Davies) is again in Toronto wanting to study Detective Murdoch for a new novel he is writing. Detective Murdoch investigates the murder of Rod Grimsby but is troubled by the confession of the victim's son Harcout, a ventriloquist, via his puppet Mycroft.

The murder of industrialist and philanthropist Howard Rookwood appears to have been done by a child or group of children. Mr. Rookwood was a supporter of Baker House which specialized in housing Home Children in the Toronto area.

A robed and hooded person begins killing people at the Greyson Institute, a facility which specializes in researching brain function. Detective Murdoch gets the case and is disturbed when Miss Sarah Pensell (Maria del Mar) tells him that she has seen the murders in a vision and that one of the future victims is Detective Murdoch.

The Queen's grandson, Prince Alfred (Chad Connell), is in Toronto and Detective Murdoch and Constable Crabtree are assigned as his police security, a task which is complicated by the prince being a bit of a partier who enjoys the company of many women. When a woman with tattoos indicating a connexion to the Irish Republican Brotherhood is found dead in a park everyone believes that there is a plot to harm the prince while he is in "the colonies".

When Henri Gaston is found in the upper limbs of a large tree in a farmer's field and there are no footprints in the freshly ploughed soil. Detective Murdoch and Constable Crabtree are perplexed. Constable Crabtree thinks that Martians might be involved. When he learns that Mr. Gaston had refused to sell his land, Detective Murdoch turns his attention to more human suspects. After getting close to solving Mr. Gaston's murder, Inspector Brackenreid informs them that they are to cease all investigation in the matter under penalty of death by hanging for treason.
Recurring star: Peter Keleghan as Terrence Meyers

Instead of worrying about what people say of you, why not spend time trying to accomplish something they will admire.
Dale Carnegie
Plugin by: Web Hosting Reviews