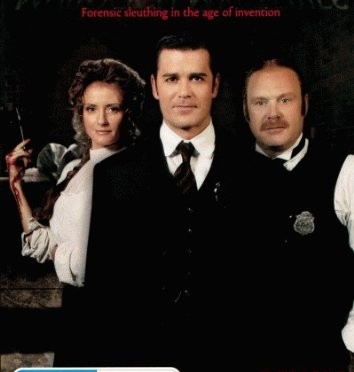 In August 2010, Shaftesbury Films announced that production on season four had begun and was scheduled to continue through November 2010. Guest stars in season four include Victor Garber, Lisa Faulkner, Simon Williams, Peter Keleghan, Craig Olejnik, and Lisa Ray. On October 15, 2010 Canadian Prime Minister Stephen Harper and his daughter visited the set of Murdoch Mysteries. As part of the visit to the set Stephen Harper filmed a cameo appearance.

Dr. Ogden's replacement, Dr. Francis (Paul Rhys), does not like Detective Murdoch's habit of calling the coroner to the crime scene and it is no different when Detective Murdoch gets the case of a body part in a block of concrete along the Don River, near the home of his predecessor, retired Detective Malcolm Lamb (Victor Garber). When other blocks with other body parts are found in the water Dr. Francis insists it is one person but Detective Murdoch is not as convinced and he sends some samples to Dr. Ogden in Buffalo. Dr. Francis says that he would have noticed when he got to doing the tests but does concur with Dr. Ogden that there are multiple victims and one killer.

Tom Meeks, a soldier at Fort York, is found murdered in the Don Valley. After another soldier is found murdered Detective Murdoch believes that someone is hunting the men and he begins to investigate the military, which is met with great opposition. Detective Murdoch discovers that the soldiers are not suffering from a disease acquired in South Africa but from severe withdrawal of methamphetamine. He also discovers some unsanctioned actions against the Boers.

Someone broke into Station four over night. Detective Murdoch is late arriving to work; when he does arrive he informs Inspector Brackenreid that he is taking a vacation effective immediately. Detective Murdoch goes to Buffalo, N.Y., initially undercover, at the request of Dr. Ogden to help her investigate the suspicious death of a patient whom she has been forbidden from autopsying. Constable Crabtree is tasked with solving the case of the break-in when a reporter threatens to expose Inspector Brackenreid as bungling and baffled.

Percival Jenkins is found murdered at his breakfast. Convention says that it was probably Mrs. Jenkins or one of their children but Detective Murdoch believes there is more to this case. While questioning the servants Detective Murdoch discovers everyone in the house has some issue with the victim and that many maids have been let go over the years for their loose morals. Further confusing is the statement by the victim's elderly mother, that Alma, who had been a maid at the house 20 years previous, is the killer because Alma died a few years before.

Monique, a young woman from France, disappears while visiting her sister Sophie and brother-in-law at their Toronto hotel. Keys for rooms 409 and 212 are found in Monique's purse along with film but her camera is missing. Sophie's husband directs Detective Murdoch's attention to a man Monique met on the train from Montreal who called himself David Deletran. Constable Higgins alerts Detective Murdoch to a man who went into room 212 who turns out to be a French police officer visiting Canada for a conference who has been hired by the women's father. Still believing a photograph of Monique would aid in finding her Detective Murdoch devises a way to transmit a photograph via telegraph.

At a country fair in the city Detective Murdoch is captivated by the detail of a miniature streetscape. While admiring the work Detective Murdoch notices there is a man with a rifle in the window of one of the houses. Believing it to be the depiction of a crime scene the miniature is brought to Station four and the artist, Lydia Howland (Liisa Repo-Martell), an autistic woman who doesn't speak, and her caretaker brother are questioned. No murder or missing person has been reported but with the help of Lydia, the reluctant participation of the people of the neighbourhood, a photograph in a newspaper, and an unconventional autopsy by Dr. Ogden, Detective Murdoch is able to determine who was murdered and why.

A construction crew working along the Toronto harbour, in an area that previously was the site of docks for passenger ships and more recently a landfill, find a body about 15 feet below the surface. On the body is a gun from 1862, a pocket flask, and chains to ensure he stayed in the water. Inside the false bottom of the flask is a torn paper with two names, and a key wrapped in a letter from Sir John A. Macdonald, Canada's first Prime Minister, authorizing transport of cargo. When Constable Crabtree discovers that the body is that of the Minister of Militia and Defence who disappeared in 1864 the matter comes to the attention of Prime Minister Wilfrid Laurier, as a matter of national security involving potential fallout from Canadian involvement in the American Civil War.
Canada's current Prime Minister, Stephen Harper, guest stars in the episode as Constable Peter Armstrong.
Recurring stars: Peter Keleghan as Terrence Meyers and Matthew Bennett as Allen Clegg

When a switchboard operator hears an apparent murder over the telephone, Murdoch reveals the elaborate workings of an unlikely gang of thieves. A spirited telephone operator, Tess Moffatt, (Rachel Wilson) takes a liking to Constable George Crabtree and becomes a headache for Detective Murdoch after Tess hears what appears to be the strangulation death of a young woman over the telephone lines.

Tess fancies herself an amateur sleuth and has cried wolf before. Inspector Brackenreid, in the midst of a "makeover" at the hands of his political advisor Isaac Lowe (Graham Abbey), resists Murdoch's wish to pursue Tess's latest report. Then a murder victim is discovered, vindicating Tess, and a second body – tortured to death – is also found.

Crabtree and Tess grow closer as they work to solve the murders, but it's Murdoch's improvised telephone wire-tapping technology that uncovers an elaborately constructed criminal enterprise and a psychotic killer who will stop at nothing to preserve it.

While probing the brazen shooting of a man on a streetcar, Murdoch is shocked to discover it may be connected to Anna Fulford, his 'might-have-been' love from Bristol. Anna Fulford (Lisa Faulkner), the beautiful barmaid that Detective Murdoch fell for last season in England, has stopped over in Toronto on her way to Niagara Falls... to be married. Barely over that shock, Murdoch learns that Anna's fiancé, a businessman from New York City, has vanished. Murdoch suspects Anna's betrothed may be connected to a bizarre murder aboard a streetcar... a shooting no one heard.

When the Anna's fiancé also turns up dead, Murdoch fears the work of The Black Hand – the forerunner of the Mafia – behind both killings. He's all too aware that The Black Hand will hunt down and kill anyone associated with the deceased fiancé, even a complete innocent like Anna. Meanwhile, Inspector Brackenreid faces pressure from his backers in his run for Alderman to score political points by harassing a band of Gypsies and their mysterious leader, Mirela (Lisa Ray).

Investigating the murder of a priest at a convent, Detective Murdoch encounters his long-lost sister, Susannah (Michelle Nolden), now the Reverend Mother of the convent. Their reunion is strained when suspicion falls on two nuns. Susannah insists the nuns are innocent, claiming that a reclusive nun, Sister Catherine, communes with angels and that the angels told Sister Catherine that a demon is responsible for the priest's murder. Murdoch's reluctance to accept this pits Susannah against him and calls his religious beliefs into question.

When Murdoch realizes that the murder victim was not a priest but an imposter and that he had a criminal history, the case takes on a more earthly footing. When the true source of Sister Catherine's angelic messages eventually becomes clear, it uncovers a love triangle of deceit and revenge. Then Murdoch receives the shock of his life when Susannah confesses to the murder. That isn't the only secret she's been keeping from him. In a stunning final scene, Murdoch's life is changed forever.

When a young schoolgirl is found dead of an apparent drowning and blood loss, Detective Murdoch finds himself in the midst of the late 19th century vampire craze created by the recent publication of Bram Stoker's Dracula. Constable Crabtree is convinced that a vampire is responsible for the murder, earning him the wrath of Inspector Brackenreid. The facts fit Crabtree's theory, even more so when Murdoch discovers that three other schoolgirls met with a mystery man and bear mysterious bite marks on their necks.

Toronto Gazette reporter Paddy Glynn (Ephraim Ellis) stirs up a public outcry and soon, reports of vampires are rolling in from all over the city. Even Dr. Julia Ogden (Helene Joy) is swept up by Stoker's tale of forbidden sexuality, struggling to control her yearning for Murdoch despite her engagement to Dr. Darcy Garland (Jonathan Watton), but when another schoolgirl is attacked, Murdoch uncovers the identity of the mystery man and the motive behind his deadly quest for blood. Is this man a killer? The answer to that question is found in the realms of youthful lust and jealousy.

A series of brazen daylight bank robberies by an amorous, dashing masked man who steals from the banks to give to the poor sends Detective Murdoch on an unpopular chase. The thief has become a hero to the citizenry, thanks in no small part to Toronto Gazette reporter Paddy Glynn (Ephraim Ellis) whose articles have raised the bandit to near Robin Hood status.

Meanwhile, Ruby Ogden (Sarah Gadon) surprises Dr. Ogden by arriving in town to assist with – and then take over – Julia's wedding planning. It also becomes clear that Ruby has doubts that her sister is marrying the right man. As Murdoch struggles with the idea of Julia's impending nuptials, he also has to deal with a thief who seems to anticipate his every move, but when a beautiful bank employee is murdered in cold blood during a robbery, Murdoch has to rethink his approach... before more people are killed.

A man is found murdered at Lewis Carroll costume party. All clues suggest the murderer is the one dressed as the Mad Hatter, Detective Murdoch. Even after solving this crime, Murdoch does not attend Dr. Ogden's wedding and turns in his police badge.
Recurring star: Nigel Bennett as Inspector Gilles.