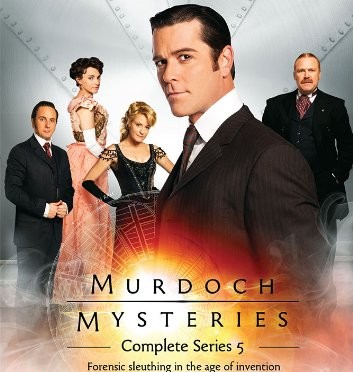 Season five was announced at the Citytv 'Summer in the Square' on May 31, 2011. Part of the festivities of the day included a Victorian era costume competition with the winner getting a role in an episode of Murdoch Mysteries.

Murdoch has left Toronto, and police work, for the Yukon. However, while in pursuit of fortune in the Klondike Gold Rush he is drawn into a murder investigation (with the help of Jack London) and realizes that his days as a detective are not yet behind him.
Recurring star: Nigel Bennett as Chief Constable Giles

Detective Murdoch must tread carefully when he pursues a Catholic suspect in the murder of an Alderman, killed during the attempted assassination of the city's Protestant mayor.
Recurring star: Nigel Bennett as Chief Constable Giles

When Detective Murdoch investigates a series of deaths linked to an exhibition of Egyptian antiquities, Constable Crabtree is convinced a Mummy's curse is to blame.

Murdoch investigates the poisoning of a young opera singer, and soon suspects that she was not the intended victim.

Detective Murdoch suspects the ambitious inventor of an electric vehicle murdered an associate who stood in the way of his plans to compete with Henry Ford.
Recurring star: Peter Stebbings as James Pendrick

Detective Murdoch's investigation into the disappearance of a quiet librarian leads to a reunion with former love Anna Fulford and the discovery of a seamy underworld.

During his investigation into the murder of a shy librarian with a secret life, Murdoch encounters another young woman behaving seductively.

Murdoch's investigation is assisted by Alexander Graham Bell when an inventor is killed by a rival at a convention. Guest star: Arlene Dickinson

A high-stakes card game involving Dr. Grace ends with the death of a player in the party. Murdoch is shocked to learn the true cost of their wagers is the opportunity to die.

Murdoch is taunted by a deranged kidnapper who leaves talking dolls with personal messages directed at him at each crime scene.
Recurring star: Michael Seater as James Gillies

Murdoch investigates when the captain of the Toronto Wellingtons hockey team is found dead in the locker room, shortly after fighting with another player.
Recurring star: Nigel Bennett as Chief Constable Giles

As the twentieth century approaches, Murdoch investigates the claims of a man who says that time travelling to the future provided him with information that allowed him to stop crimes.
Recurring star: Nigel Bennett as Chief Constable Giles.