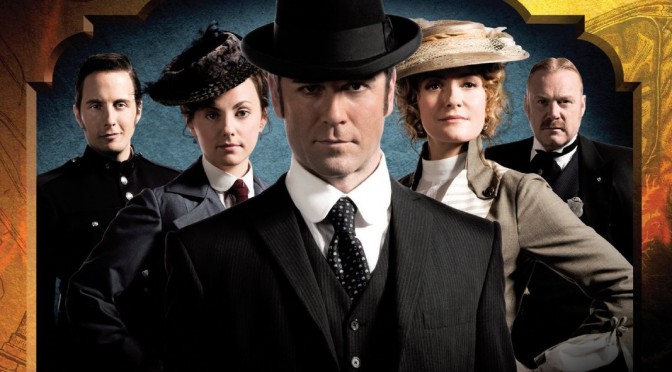 On April 4, 2014, CBC renewed Murdoch Mysteries for an eighth season. The season premiered in Canada on October 6, 2014 and airs Mondays at 8:00 pm on CBC. In the United Kingdom and Ireland, it premiered on January 26, 2015 on Alibi. It premiered on February 21, 2015 in the United States.[citation needed]

Murdoch investigates two cases related to the harbour. The first is the murder of a local merchant and the second is the discovery of a woman's body, recovered on the shore. In an effort to increase order, constables are dispatched to the area and run foul of the dockworkers. Inspector Brackenreid has physically recovered from his beating but not psychologically. When the two workers suspected in his beating come to his home Brackenreid decides to seek revenge on them.

The episode ends in a cliff-hanger with the constabulary engaged in a melee on the docks with the workers who prevent them from arresting the suspects. In a sub-plot, Dr. Ogden and Dr. Grace are arrested for protesting in favour of women's general suffrage in front of the Ontario legislature.

In a continuation of the previous episode, the violence on the waterfront continues while Brackenreid's attackers remain at large. The arrest of Drs. Ogden and Grace leads to a court date. They run into an old friend of theirs, complicating matters.

Murdoch teams up with Bat Masterson to hunt down Butch Cassidy and the Sundance Kid. Meanwhile, Julia struggles with Murdoch's desire to marry in the church, which conflicts with her own values.

As their wedding day approaches, Murdoch and Ogden intervene in the trial of a woman accused of killing her husband.

A group of dedicated fans of Murdoch stage a murder to watch Murdoch work, which deters the detective from an actual murder case.

The remains of a constable from 1881 are discovered in the station house basement, leading Murdoch to investigate whether any of his colleagues was responsible.

A businessman is found electrocuted, apparently by his own invention, and all clues point to Thomas Edison's son, Edison Jr.

Constables Crabtree and Higgins go undercover as a vaudeville act at a local theatre after a comedian is found murdered.

Murdoch investigates the death of a man found in a river, and soon finds himself searching for the infamous Holy Grail in a booby trapped temple much like the Hagia Sophia.

A murder of a land surveyor leads Murdoch and Crabtree to Northern Ontario during the silver rush. Back in Toronto, Dr. Ogden sees potential in Brackenrieds painting skills.

Murdoch investigates the murder of a model who was killed during a protest at a corset show. The past history of suffragette Lillian Moss is revealed during the process of the investigation. She and Dr. Grace grow close.

Murdoch and Ogden investigate a strange murder at the asylum involving a group of violent women, one who vows revenge on Dr. Ogden.

Inspector Brackenreid's nephew, Charlie, joins the constabulary as he and Murdoch investigate the murder of the leader of an all-female thieves gang.
Guest star: Charlie Clements as Charlie Brackenreid

The murder of a young woman while praying at her parents' grave and the subsequent disappearance of the priest she had last contact with, brings together Murdoch with the priest, who raised him in childhood.
Special guest star: Peter Outerbridge as Father Keegan

Crabtree investigates the death of a professional wrestler, marking his first case as a detective. Brackenreid give his savings to his barber, Mr. Chilton, only to discover that he has closed his business and disappeared with the funds. The Temperance League attempts to woo the suffragettes by offering support for their candidate in return for adding their policies to their platform which they eventually reject. Guest star: David Chilton as Mr. Chilton (aka the "Wealthy Barber")

Murdoch investigates a murder that, according to Agent Terrence Meyers, involves national security and the return of. Meanwhile Drs. Ogden and Grace try to ensure the election is conducted fairly with the assistance of the other ladies of the suffragettes. A young Agnes Macphail takes notice of their efforts. Crabtree proposes to Edna Brooks only to be greeted by her husband who was presumed to be deceased.
Recurring star: Peter Keleghan as Terrence Meyers

The constabulary investigates what they believe is a "sequential killer" that Murdoch discovers is a macabre form of gambling. The leaders then turn their attention to Murdoch. Crabtree is preoccupied with the physical abuse sustained by his Edna Brooks at the hands of her recently returned husband.